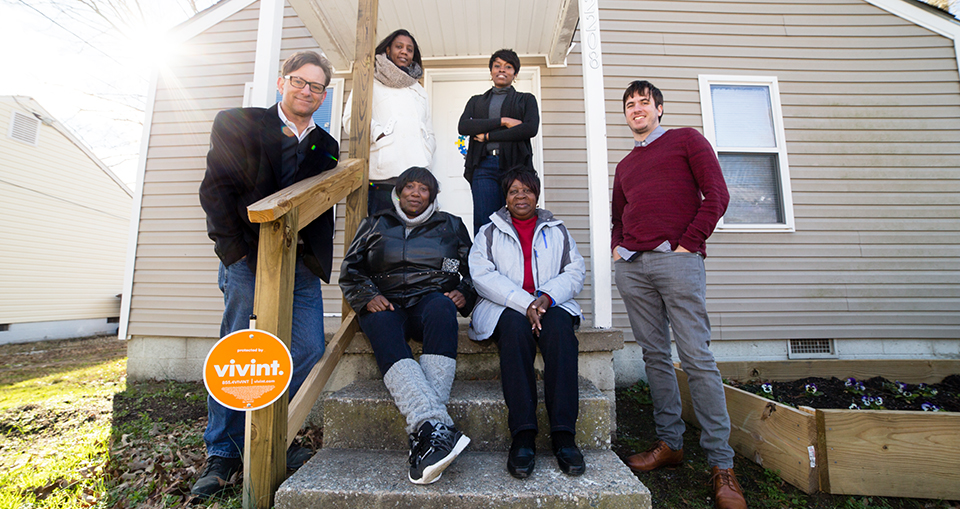 Verna Torain has lived in east Greensboro’s Cottage Grove neighborhood for more than 25 years. When she first moved to the community, many residents worked in nearby factories.

“Now everything’s closed down,” she says. “There’s no jobs.”

Traditional manufacturing jobs that powered the Piedmont Triad’s economy for decades have mostly disappeared — automated away or shipped abroad.

The economic toll has left its mark on Cottage Grove. Houses and apartments have fallen into disrepair. And it’s not just buildings suffering.

Job loss and substandard housing are two factors contributing to a host of other issues, including health problems. These are the problems that Torain and other volunteers and activists work on each day.

The connections among housing, sickness, and related problems are the primary focus of Dr. Stephen Sills’ Center for Housing and Community Studies at UNCG.

Sills, an associate professor of sociology, is using statistical analysis and software to better understand these issues. Then, he works closely with residents, plus nonprofit organizations, government agencies, foundations, and health care providers, to design, test, and implement solutions.

“I’m working on health one day; I’m working on educational outcomes on another,” he says. “I’m working on mortgage markets and fair housing. It looks like I’m all over the place, but what I’m doing is taking problems that come to me and applying the best research tool I have.”

Sills also taps other faculty — such as Dr. Keith Debbage, who holds a joint appointment in the Department of Geography and the Bryan School of Business and Economics, and Dr. Ken Gruber at the UNCG Center for Youth, Family, and Community Partnerships — to bring additional expertise to center projects.

With the support of a highly competitive Invest Health grant, Sills and his partners are currently examining the relationship between substandard housing and pediatric asthma in Greensboro.

For the project, Sills combined multiple databases from the U.S. Census Bureau, the City of Greensboro, and Cone Health.

In the summer of 2016, a dozen student researchers used software that pulls photographs from Google Maps’ streetview. The students spent untold hours sitting at computers and viewing images of tens of thousands of Greensboro properties.

For each one, they completed a 53-question survey based on the images — is the property residential or commercial? What’s the condition of the roof or siding? Are there potential code violations, such as grass being too high or junk cars in the yard?

With all that data, software could be used to map out substandard housing “hotspots.”

Those hotspots were cross-referenced with Census data and data from Cone Health’s Emergency Department on pediatric asthmas visits.

That brought Sills and his team to the Cottage Grove neighborhood.

Many of the properties are poorly maintained — either because their owners can’t afford to repair them or because they have little incentive to invest more capital in rental housing.

The result? A leaking roof creates high levels of moisture inside a home, spurring mold growth, which then exacerbates the asthma of children living there. Holes in a foundation allow insects and pests into a house; roach droppings, rodent waste, dust mites, and the like also worsen symptoms and trigger asthma attacks.

Josie Williams, the Cottage Grove project team coordinator for the Greensboro Housing Coalition, works closely with resident families, helping them improve their housing and their lives. She’s based in a house-turned-community-center in the neighborhood.

“I get to see firsthand the issues that are going on,” she says. She recalls one family with children ranging from 8 to 14 years old. When they moved into the neighborhood, “their asthma became severe because of the air quality.”

She’s also seen residents who leave their doors open when they can, or frequently go in and out of their homes because of the poor indoor air quality.

And although asthma is the specific condition that Sills’ team is tracking, it’s hardly the only challenge arising from substandard housing.

“For certain senior citizens, I noticed there were no bannisters on the stairs to their front doors,” says Sandra Williams, another resident and volunteer in Cottage Grove. One rainy day, she says, she saw an elderly man crawling up his front steps to get to his house, unable to navigate them safely without a rail. She helped him in.

One poorly maintained apartment complex in particular is a striking source of pediatric asthma cases. The data also tell Sills that problems in one apartment or one house often affect neighbors, so a single substandard home can impact a whole neighborhood.

“A lot of the problems concentrate at the same time in the same place,” Sills says. “We’re providing the data that then inform the policy. It informs decisions from the health care system. It informs community advocacy agencies on where to go.”

Josie Williams of the Greensboro Housing Coalition walks a group through the Cottage Grove neighborhood, pointing out issues that can lead to health problems. [Photo by Mike Dickens]

One Tuesday morning in early January, almost a dozen people have gathered in the Center for Housing and Community Studies. Besides Sills and his staff and students, there are community volunteers, housing organization representatives, economic developers, a Cone Health staffer, and a representative of the Cone Health Foundation.

The goal of the meeting is to discuss next steps in the Invest Health project. Normally, this twice-monthly meeting takes place in Cottage Grove, but it snowed the previous weekend. Many neighborhood streets are still impassable.

How can what the group has learned — from both Sills’ data and community partner and resident input — inform city plans for just-approved housing bond funds? How hard should the group pressure landlords in the area whose properties need improvements — and who among the group should take the lead on that? And much more.

“It’s really important for Cottage Grove, now that we’ve got their trust, that we deliver value,” Sills says to the group.

That sentiment is echoed by others. “They’ve been let down so many times that building trust is really hard,” says Beth McKee-Huger, referencing residents of the most rundown apartment complex. McKee-Huger is a volunteer and retired nonprofit executive who has worked on housing issues in Greensboro for almost 30 years. “They’ve been hurting for years.”

Among the top priorities are plans to create a minor repairs program. It would harness trained volunteers to make simple, inexpensive repairs to homes, such as fixing a leaking roof.

Those repairs, along with health education (“don’t clean with bleach — it can trigger an asthma attack”) and advice on eliminating mold and other triggers, can reduce asthma attacks that send children to the hospital, keep them out of school, and cause their parents to miss work.

Between the data analysis that identifies “hot spots” and proven interventions, such as small repairs and health education, the group hopes to improve Cottage Grove and develop a model for other neighborhoods.

“We’re the design team,” says Mac Sims, president of the East Market Street Development Corp., an economic development group focused on east Greensboro. “You can take this model and apply it in any place in the community.”

Taking effective, proven ideas to other neighborhoods — and even other cities — is Sills’ bigger vision.

“We’ve done a proof-of-concept with Cottage Grove,” Sills says. “Can we translate that to Ole Asheboro? Can it translate to some of the neighborhoods in High Point that we’re working with?”

Eventually, Sills says, the work could create a model that could be applied across an entire city here or anywhere in the country.

And it’s not just poor, urban communities that Sills is focused on. For example, the center has researched the impact of opiate addiction on rural communities in western North Carolina and Georgia.

“When I’m looking at housing and health, I’m in the same neighborhoods where I know there is racial steering that goes on,” he says. “I know that I’ve sent a white female tester to this neighborhood in a previous project, and the property management company said, ‘You might not want to live in that neighborhood.’”

“It’s a fair housing issue at the same time that it’s a substandard housing issue; it’s a health issue; and it’s an economic opportunity issue. They’re really all intricately connected.”

Sills’ research pinpoints and measures how those issues cluster together, and how tackling one can affect the rest of them. That’s what Sills cares about most.

With any report that comes out of the center, he’s looking for policies changed, community funding generated, and numbers of lives impacted. Ultimately, Sills says, “It’s ‘What’s the impact on the community?’”

Greensboro is one of 50 U.S. cities selected to participate in the Invest Health initiative. The funding from the Reinvestment Fund and Robert Wood Johnson Foundation supports the development of new strategies to help low-income communities thrive, with a particular focus on health.